You be the judge.

What the U. S. Constitution says:

What the Founding Fathers said about war:

C. Pinckney: "Observed that the President's powers did not permit him to declare war."

Jefferson: "The question of declaring war is the function equally of both houses (of Congress)." "If Congress are to act on the question of war, they have a right to information (from the executive).

"We had reposed great confidence in that provision of the Constitution which requires two-thirds of the (Congress) to declare war. Yet it can be entirely eluded by a majority's taking such measures as will bring on war."

"The powers of declaring war being with the (Congress), the executive should do nothing necessarily committing them to decide for war."

"No country, perhaps, was ever so thoroughly against war as ours. These dispositions pervade every description of its citizens, whether in or out of office."

Franklin: "I would try anything, and bear anything that can be borne with safety to our just liberties, rather than engage in a war with such near relations (as the British), unless compelled to it by dire necessity in our own defense."

"At length we are in peace, God be praised, and long, very long, may it continue. All wars are follies, very expensive and very mischievous ones. When will mankind be convinced of this, and agree to settle their differences by arbitration? Were they to do it, even by the cast of a die, it would be better than by fighting and destroying each other."

"In my opinion, there never was a good war or a bad peace. What vast additions to the conveniences and comforts of living might mankind have acquired if the money spent in wars had been employed in works of public utility! What an extension of agriculture, even to the tops of our mountains; what rivers rendered navigable, aqueducts, new roads, and other public works, edifices, and improvements, rendering a...complete paradise, might have been obtained by spending those millions in doing good which in the last war have been spent in doing mischief; in bringing misery into thousands of families, and destroying the lives of so many thousands of working people, who might have performed the useful labor!"

Jefferson: "I do not believe war the most certain means of enforcing principles. Those peaceable coercion which are in the power of every nation, if undertaken in concert and in time of peace, are more likely to produce the desired effect." If nations go to war for every degree of injury, there would never be peace on earth."

The Monroe Doctrine contained a pledge which modern American leaders might well remember, and that is the promise that even though the United States would look upon any foreign invasion of the Western Hemisphere as a threat to her own security, she would not use her military power to interfere in the domestic or internal affairs of any other nation. Jefferson clearly stated, "Peace, commerce, and honest friendship with all nations, entangling alliances with none."

The Founders' position on foreign relations is not "isolationism" but one of "separatism." They intended to become strong and independent, but not the policeman of the world. They warned against the tendency to favor one nation over another or to mix political interdependence with commercial and economic interdependence. They steadfastly opposed alliances which involved political interdependence. Their motto seems to have been summed up in the phrase, "Coordination yes, but consolidation no." Washington said. "Observe good faith and justice toward all nations. Cultivate peace and harmony with all." (The Constitution of the United States in a Nutshell p 27) (Making of America p 769)

Right is right and wrong is wrong.

War is a terrible loss.

•Loss of good men and women in the battle.  This causes great suffering to them because their lives are cut short. A loss to their families because they can no longer be with them. A loss to us as well, we don’t get all they would have contributed to society.
•A high monetary cost.  In actual dollars, over 1.5 Trillion.
•Loss of respect with other nations.  When we go to war to defend ourselves that is right in the eyes of other nations.  But when we go to war for any other reason, other nations become suspicious of us.  They realize we can’t be trusted because if we go to war with another country without the reason, we may also go to war with them.
•Less secure.  Once other nations view us as their enemy and an imperial nation, then they can very easily prepare to go to war against us.
•Mental anxiety, for all of us, knowing that the war is going on and hoping it will soon be over.
It generally it is because of an attack on one country to another, that war is begun.   Our country was attacked on September 11th of 2001.  However, Iraq was not the country that attacked us.  Nevertheless, President Bush insisted on a counter attack on Iraq for something they never committed.  I remember the day Present Bush announced the attack and I heard him tell the American People, not to worry because it would be a war that would be of a very short duration.  That is what a war should be, one of short duration.
You get in there and you fight until one side or the other wins, then you pull out.  I don’t believe the majority of the American People ever really supported this war.  I believe the American People would have never agreed to such a long lasting war.  We were still suffering from the effects of the Vietnam War and the American people were not wanting to repeat that kind of war again.  Our military have been fighting the Iraq war for over 10 years now.  It makes you wonder what politicians mean when they say a short duration.
I don’t know how many of you feel like I do.  It wasn't right to go to war against Iraq in the first place and it is not right to continuously ware away our military in such an unwise effort.

This war has turned from being a war against an attack on us to one of helping the Iraqi people, building up what they have lost and helping them gain freedom.  Americans seem to be very compassionate towards others and doing what they can to help the unfortunate.  Being too compassionate often leads us down roads that we should not be traveling on.

Here is one of my favorite saying to illustrate this point:

A techniques used by revolutionists: A fervid but false solicitude for the poor and unfortunate over whom they thus gain mastery and then enslave them."

A quote by a wise man: David O. McKay
In war there are very few things that are right and a lot of things that are wrong.  I just pray that we have gone to war for the right reason.  It is a grave responsibility our leaders have taken when they drag the American people into a war that was not right in the first place.  It is even worse when they leave us there year after year.

Learn more, get the book I highly recommend, The Making of America, today.  Remember and call your political leader, they need to know how you feel, if you don’t stop your suffering, who will? 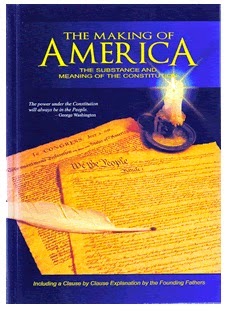