Can there be restrictions put on our Freedom of Speech?

The First Amendment of the U. S. Constitution reads: The Congress shall make NO law abridging the freedom of speech, or of the press.

This provision gave the American people the RIGHT to have the federal government prohibited from exercising any legal authority over the freedom of speech or the freedom of the press.

This provision does not in any way imply that the freedom of speech and the freedom of press are absolute rights. Both must necessarily operate under reasonable restrictions. However, the Founders wanted these regulations and standards of propriety to be established by the states, not the federal government.

On the state level it is necessary to prohibit freedom of speech in a number of ways. For example, it is not permissible to use freedom of speech to slander or libel another person. It is also unlawful to cry “Fire!” in a crowded auditorium or theater as a practical joke and thereby cause a panic. There are also restrictions on where free speech may be exercised if it will attract a crow and impede the use of a public thoroughfare or park without prior permission.
Freedom of the press has been a difficult right to protect and preserve.

Almost from the moment that the art of printing began to be a significant cultural influence, efforts were exerted to gain control of its use by the king or the central government. For example, Henry VIII (1509-1547) took absolute control of the press, both as to who could print and what could be printed. When Cromwell ruled during the period of the Lone Parliament, the same control continued. By 1758, however, freedom of the press had been established to the point where Blackstone could say, “Every freeman has an undoubted right to lay what sentiments he pleases before the public...But if he publishes what is improper, mischievous, or illegal, he must take the consequence of his temerity.” (Making of America p 688 - 689)

The state can pass laws to protect the health, safety, and morals of its people. Moral problems include such matters as liquor, gambling, drugs, nudity and prostitution. There are those who feel that there should be no restrictions on the vices. They claim people should be allowed to indulge in vices if they wish.

The answer to this problem is fairly simple. First of all, private debauchery happens to fall into the category of private morals, which must be controlled by the individual and his conscience. However, the issue of public morals is another matter. Private morality is a matter between a person and his conscience, but there was no margin of allowance for immorality between consenting adults or for personal misconduct affecting any member of the family or society.

The moment a person’s behavior violates the legal standards established by the community, that behavior falls under the restrictions of public morality. “No matter how abandoned may be a man’s principles, or how vicious his practice, provided he keeps his wickedness to himself, and does not violate public decency, he is out of the reach of human laws. But if he makes his vices public, then they become by his bad example, of pernicious effect to society, and it is the business of human laws to correct them.” Sir William Blackstone.

In a republican system, the majority of the people in a community have the right to protect the quality of life which they consider to be in the best public interest. This means that no individual has the right to sell, distribute, or promote any products or activities which are prohibited by the rule of the majority. Of course, government has no business snooping into the private morality of people, debauched though it may be, but the moment there is a complaint that someone is promoting debauchery or adversely affecting someone in the community, it is a matter of public morality. The community has the right to intervene. The vices are a great temptation to a certain type of adventurous Enterpriser because it nearly always brings in enormous profits. To protect itself, society outlaws these activities unless the majority of the community want to allow them. (Making of America p 207) 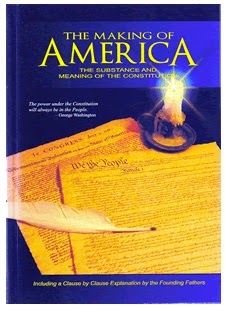 Email ThisBlogThis!Share to TwitterShare to FacebookShare to Pinterest
Labels: Freedom, freedom of speech